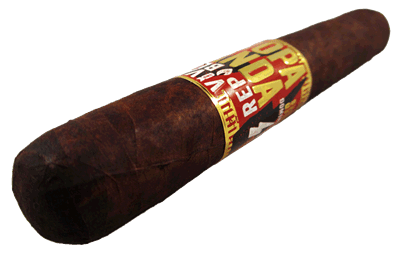 Viva Republica is headed by Jason Holly, who is also in charge of product development for Miami Cigar and Co.  Their other releases include the Rapture and Guerilla Warfare lines, as well as a line called C4W V-Day Limited Edition Charitable Release, with all wholesale proceeds going to Operation Cigars for Warriors.   The Viva Republica cigars are made at La Aurora’s E. León Jimenez factory in the Dominican Republic, and come in three different sizes:  Disinformation (4×54), Five and a Half Truth (5.5×54), and Big Lie (6×58).

This is the first Viva Republica Propaganda cigar that I have smoked, so it will be a “first impression” sort of review.

The Viva Republica Propagana Disinformation comes dressed in a dark and mottled wrapper, showing even darker splotches throughout, with an oily sheen, a few bumps, and minor veining.  It is very firmly packed, and features a nicely wound double cap.   The band is wide with a busy combination of red, shiny metallic gold, black and white; a jumble of, er, information, including the origin of the tobaccos used and even lightning bolts and a Guy Fawkes mask.  Although a little (or a lot) hard to digest all at once, the colors do coordinate well with the shade of the wrapper.   The nose off the wrapper is mossy earth and light barnyard, while the foot gives off primarily tobacco with a faint hit of chocolate.  The cold draw produces sweet tobacco flavors on the tongue.

Out of the gate, the VRPD (yeah, I’m getting tired of typing that out, lol) displays smooth cedar, a moderate amount of pepper, and some sweet spice.  After a few puffs, some mossy/grassy tinged earthiness creeps in, adding depth to the flavors.  The draw is ideal for me, with just the right amount of resistance, and each puff produces a satisfying mouthful of smoke.  The burn is nearly razor sharp, but a bit slanted.  The cigar pumps out a pretty serious amount of resting smoke, but the aroma is a pleasing blend of toasty wood and light coffee.  About an inch in, the pepper has scaled back, while cedar, earth, and toastiness continue, along with the arrival of a bit of breadiness and the sweet spice in the background.  The first ash tapped off at about an inch and a half, and was fairly solid, with a bit of flaking.

At this point the VRPD is a solid medium bodied cigar, with no nicotine to be felt.  The burn has been doing its best to even itself out and the stationary smoke has lessened.  The smoke has become very smooth and more bread-like, while the cedar and earth still linger.  Maybe (probably) it’s me, but I seem to be picking up differences from puff to puff – at times getting a faint spice somewhere in the area of nutmeg and cinnamon, and a bit of char or even a bit of sweet citrus at other times.  Meanwhile, the burn has completely evened itself out.  While the has body climbed into the medium/full range at the end, it has smoked absolutely cool all the way down, with only a bit of harshness at the very end, and has produced only a bit of a nicotine gut tickle.

First of all, I’d like to thank Ed Ryan for affording me the opportunity to smoke the Viva Republica Propaganda Disinformation.  I was a little surprised that I didn’t pick up more of a coffee/chocolate taste on the palate as I’ve seen in other reviews, but the flavors that were there were certainly enjoyable, as was the overall experience.  The construction of the cigar was great and only required one re-light when I let it sit a bit too long.  I also really like the size of this little pudgy guy (hey, that’s me!), although I would like to see what it would be like in a corona-ish size.  I would also like to pick up a few more to let sit in my humidor for a few months or so to see how that might meld everything a bit more.  The price tag may seem a bit high for a 4” stick, but an hour and a quarter of smoke time puts it right in the realm of a standard robusto and close to a toro, so I think it’s a reasonable asking price.  I think it’s a cigar that is well worth checking out.

Want to join the discussion?
Feel free to contribute!