Choosing a Cigar The ring gauge of the cigar will give you a general indication of how full the taste is. The larger the ring size, generally, the fuller, smoother, cooler, and slower the smoke will be. Ring gauge is the standard set to measure the diameter of a cigar. 64 ring is equal to one inch.

Cutting   The cap or the head of a handmade cigar must be cut before lighting it. You can do this with a cigar scissor, guillotine cutter or a punch cutter. The guillotine is recommended for the most effective cut. Make sure not to cut the entire cap off, because this could damage the wrapper and cause it to unravel. No one wants pieces of tobacco in their mouth when trying to enjoy a fine cigar. If you are cutting a Figurado, a cigar with a pointed cap, cut the cigar just before the widest part of the cap.     Lighting Lighting the cigar is an art that will enhance your enjoyment. By using a slow, two-step process you can ensure that one side of the cigar will not burn faster than the other side.

Step one: Hold the cigar horizontally and rotate it in the flame to evenly warm the end.

Step two: Put the cigar in your mouth. Keeping it in a horizontal position, hold the flame only to the tip of the cigar, and draw slowly as you continue to rotate. Some people find it easier to tilt their cigar to a 45? angle to light it. Try to keep the actual flame away from the end of the cigar to avoid singeing the tobacco, which can leave a bitter taste. 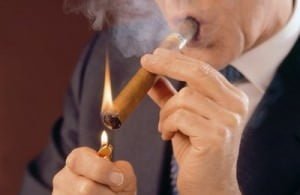 Relighting If you need to relight your cigar, first clear off all the ash by gently rubbing or tapping your cigar. After toasting the foot, blow out through the cigar to expel old gasses or resin that may be left behind. Failure to do this step could alter the flavor of your cigar leave a bitter taste. After you blow through the stick, continue the normal lighting process. If that sounds too complicated, simply take out your cutter and cut your cigar just above the ash. That should leave you with a mostly fresh surface to light.   Smoking Cigars are meant to be savored and appreciated for the taste, the feel, and the aroma. Don’t rush it. The rule of thumb is to take a puff about every minute and remember – don’t inhale. A properly rolled cigar should remain lit but, if it extinguishes itself, it is proper to relight it within one to two hours. Any longer than that, it will taste stale.   Smoking Etiquette When it comes to enjoying cigars, a lot of it depends on your own personal preference. But here are some tips: Ask: Some people around you might not share your love for cigars, which is why it’s recommended that you ask a simple “May I?” to anyone nearby before torching up that cigar. Band: To remove a cigar’s band, or let it stay? The short answer is, do as you please. There is no “correct” protocol – but why not let that handsome Montecristo band stay on? If you decide to remove the band, it’s often a good idea to smoke part of the cigar first. Smoking the cigar will warm the glue on the band making it easier to remove otherwise you may damage the cigar. Ash: Most say to let the ash linger on the cigar until it falls of its own accord, and not to flick it into your ashtray. Like the “legs” of great wine, ash that holds tight to a cigar is generally recognized as a sign it’s well made. The End: Let your cigar rest in an ashtray and it will extinguish itself. Do not mash it out, as you would with a cigarette. Mashing cigars out can result in acrid odors.