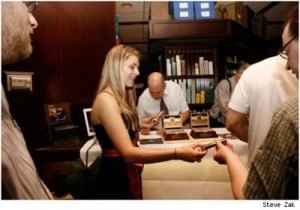 Cigar shops are a lot like any social environment. There are regulars and new guys, people new to the reason for gathering and seasoned veterans. In any situation like this, there are basic norms that should be respected in order to make the experience more enjoyable for you. I know I’ve covered this topic before, but the latest round of advice is new. Trust me, there’s no shortage of breaches of etiquette in this world (just like the subway, the sidewalk and your local bar).

Some of these may seem obvious. They are. There’s nothing in the list that should have to be said. Yet, life at the cigar shop has shown me that the simplest of courtesies tend to be overlooked.

Many thanks to the regulars at De La Concha in Manhattan for these tips. They’ve seen the worst of the worst and were only too happy to share their experiences. If you don’t need these tips, forward them to someone who does: we all know somebody who could use a little bit of help.

1. Don’t be a “conversation snatcher”
If you walk into a lounge where a conversation is taking place, don’t try to change it. You can wait for an appropriate time to weigh in and participate, but there’s nothing worse than a newcomer who disrupts a discussion about politics or the economy with some unrelated remark about the Mets’ bullpen.

2. Mine’s better
Cigar smoking is a matter of taste – whether you prefer a Avo Campanero or a cognac-dipped novelty stick. “Real” cigar smokers may not touch the latter, but not everyone chooses to be “real.” And, why should they? Realize that people gravitate to what they like, with cigars or anything else. Leave room for those around you to enjoy what they choose.

3. Know your audience
When I asked the guys around me about cigar etiquette, two gave variations of “keep it clean.” Sitting down and regaling the crowd with the previous night’s sexual conquests in lurid detail, for example, may not be appropriate. If you float a controversial topic and it doesn’t resonate, let it go. Trying to force it will not work in your favor. Likewise, if you find a crowd comparing their evenings in a way that doesn’t sit well with you, realize that you’re the outsider – and that this crowd may not be the right one for you.

4. Talk on the phone … somewhere else
Cell phones are now a part of life. Given enough people and enough time, you’re bound to hear a few of them ring. Answering the phone isn’t a big deal, just have the decency to take your call away from the lounge. Move to the back of the store, or step outside for a minute.

5. Don’t tell people how to smoke
Cigar smokers have their habits – right or wrong. You’ll irritate the hell out of somebody by telling him he cuts his cigar too low, shouldn’t bite the cap or isn’t lighting his cigar appropriately. Some are open to the advice, others not. If you decide to become a cigar educator, be ready for a chilly reception.

6. Buy from the shop where you’re smoking
This shouldn’t even need to be said, but there’s always an element that shows no respect for the establishment. Retailers don’t have great profit margins, and when you bring a cigar into a shop from the outside, you are taking money from the store. If you like having a place to smoke, support it. Cuban corollary: Some people think Cuban cigars don’t count, because you can’t get them at any store. If anything, smoking a Cuban in a shop is even worse than bringing in a legal cigar from outside. Since Cuban cigars are banned by law, you’re not only taking money from the store, you’re also putting all the employees at risk.

7. Let the staff members do their jobs
Cigar shops are social centers, and this does include the staff. You can’t help but get to know your “cigar guy,” and you’ll come to enjoy talking to him. But, when the smoke shop’s employees are with customers, unloading boxes or otherwise working, let them be. The first priority is the job, and you need to respect that.

8. Be aware of the line behind you
A good tobacconist won’t rush you or show impatience, so don’t challenge him to try. If you don’t know what you want, stand out of the way while you look around – especially if there’s a line forming behind you. Nothing is worse than hearing, “I came in last year and bought a cigar, do you remember what it was?” if you see a waiting crowd behind you, let them take care of their purchases while you find your way through the maze.

9. Don’t become the shop’s unofficial consultant
Complainers are bad enough, but it gets even worse when the “advice” is offered from a perspective of unfounded expertise. Nobody wants to hear, “The shop would be so much better if …” It gets old. If you want to go to a shop with a television, find one. Don’t go to the same sans-TV lounge every day and gripe about the fact that there’s nothing to watch. This thinking extends to the shop’s inventory, policies on outside food and drink and lounge setup.

10. Have fun
If it takes a lot of work to behave – even just the basics – you should reconsider whether to leave the house in the morning. Go to your local shop, light up a cigar and enjoy. That’s why the lounge seating is available!