Long before Columbus landed in America, the Mayan Indians of Central America smoked tobacco for pleasure and as part of their religious rituals. Their word for smoking, sikar, would one day become the Spanish noun cigarro, from which we get cigar.. 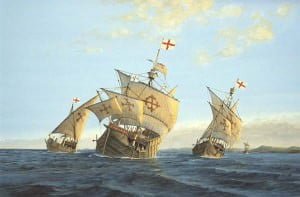 On October 28, 1492, Columbus arrived off the coast of Cuba, and once ashore, found the natives smoking tobacco in what was most likely rolled plant leaves. Over the next several years, Columbus and other explorers would gradually colonize the New World, and they discovered tribes from Mexico to North America also puffing away as part of daily life.

These explorers would bring tobacco back to the Old World, and smoking it soon became a pastime among the French, Spanish, Portuguese and eventually the British. It was the Spanish who, in keeping with the Taino Indians, first smoked what we know as cigars.

Back in the New World, farmers found that demand for tobacco meant they could earn massive amounts of money by growing it, and plantations flourished from Virginia to the Caribbean.

In 1762, the British tried to wrest Cuba from the Spanish, and they failed. However, one of the invading soldiers, Israel Putnam, brought Cuban tobacco seed to New England, jump-starting the illustrious history of Connecticut-grown leaf. 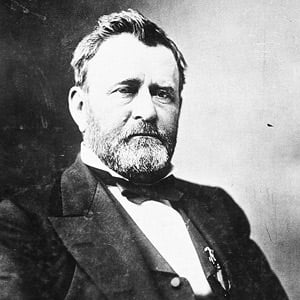 Following the American Revolution, dozens of cigar factories popped up in the newly formed United States, and by the 19th century cigars had become immensely popular. Icons such as Ulysses S. Grant identified themselves by their ever-present cigar and Mark Twain praised fine smokes in print.

Some of the best cigars, however, came from Cuba, which after an 1821 decree by King Ferdinand VII began rolling its own cigars. The island’s close relationship with tobacco goes back to before Columbus, so it was only appropriate that, when Cuban revolutionary José Martí became desperate to throw off the Spanish yoke at the end of the 19th century, the order to attack was smuggled inside a cigar.

The world’s love of cigars continued strongly into the 20th century. The introduction of machine-made cigars in 1920 caused a precipitous fall in handmade production, which by 1950 had declined from 90 percent to 2 percent. 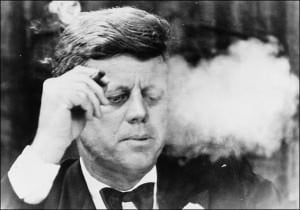 Cigar smoking in the U.S. saw another major change in early 1962 when President John F. Kennedy, one of the century’s most iconic smokers, imposed the embargo on Cuba, which was led by Fidel Castro–another famous puffer. Ever since Castro seized power in the 1959 revolution and embraced the Soviet Union as a sponsor, relations between the two countries soured to the verge of outright war.

Before Kennedy signed the order on February 7, however, he ordered his press secretary, Pierre Salinger, on a treasure hunt around Washington D.C. for every H. Upmann petit corona he could find. After Salinger rounded up 1,200 of them Kennedy put the embargo into effect.

The embargo has stayed in place to this day, sending U.S. citizens to  discover smokes from the Dominican Republic, Honduras, Nicaragua, Mexico, and other nations. Many of Cuba’s cigar makers, exiled by Castro, found their way to these countries, where they resumed their craft using their old skills.

The mid-1990s saw a resurgence in cigars, which in turn led to a collection of high- end cigar magazines hitting the nation’s newsstands, as well as other mainstream media attention.

Mix all of those factors together with a rise in the nation’s wealth, and voila! By 1997, over 400 million premium cigars were being imported into the United States. Across the Caribbean basin, hundreds of new cigar factories sprung up and began churning out their own labels, only to sink just as quickly.

As the market flooded with inferior product, sales figures for premium cigars went flat after 1998. But Consolidated Cigar, later to become Altadis U.S.A., had focused on quality and thus not only survived, but prospered despite the decline. There was a silver lining, though: those smokers who endured in their love of cigars did so with much more educated palates, and by 2007, imports had climbed again to nearly 300 million premium cigars.

If there’s one thing history has shown, it’s that the love of a good smoke endures above all.

There are no upcoming events.

Do NOT follow this link or you will be banned from the site!