Courtesy of Half Wheel: 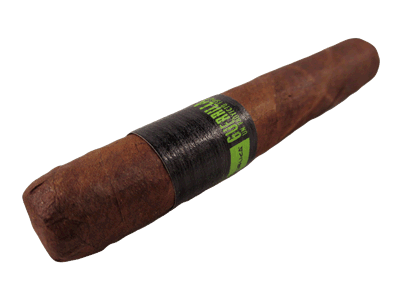 The Guerrilla Warfare is a well made cigar, with a mottled brown wrapper that is silky smooth to the touch, but has multiple obvious veins running down its length. It is fairly spongy when squeezed, but that is probably a combination of the small ring gauge and short length more than anything. The aroma coming off the wrapper is a strong cedar, leather, barnyard and pepper.

The first third of the Guerrilla Warfare starts out with strong flavors of chocolate, bitter espresso, creamy cedar and just a tad bit of nuttiness. There is a great amount of spice on the lips that sticks around through the first third and a punishing amount of black pepper on the retrohale that slowly starts to recede pretty quickly, but does stick around. Underneath the other flavors is a wonderful vanilla flavor, sometimes strong, sometimes light—but always present in some amount. Smoke production is insane—white and billowy—and the draw and burn are excellent. Overall strength ends the first third just below medium.

While the second third of the Viva Republica starts out the same as the first third, it quickly shifts gears right before the halfway point with the spice almost disappearing and the black pepper receding even more—although it is still noticeable on the retrohale. The flavors morph into more of a leather and oak dominated profile with just touches of mint, espresso and chocolate and the sweetness that was so strong in the first third has been cut in half—albeit still noticeable. The construction remains excellent and the smoke production continues to be well above average. In fact, the biggest change is the strength—which has ramped up significantly—and ends at just under the full mark by the end of the second third and only seems to be getting stronger.

Coming into the final third of the Guerrilla Warfare the strength has now easily pushed through the full barrier and seems determined to stay there for the duration of the smoke. Flavors of bitter espresso, creamy cedar, nuts, cloves and a tiny amount of licorice flit in and out, none of them overly dominant at any specific point. The vanilla sweetness from the first two thirds is a bit stronger here, but seems overwhelmed by the strength, especially at the end. The profile does turn harsh at the very end of the cigar, but it was well past the point that I should have put it down anyway. The construction remains constantly wonderful to the end, and the strength is solidly in the full camp by the time I put it down.

Want to join the discussion?
Feel free to contribute!